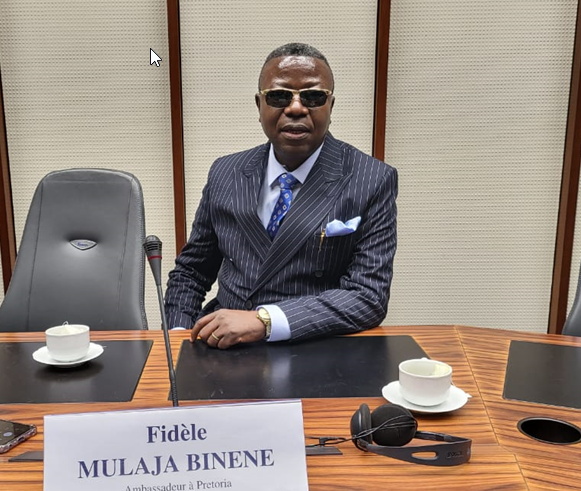 Egmont Palace which houses the Royal Institute of International Relations in Brussels was the place to be for Fidele Mulaja Binene. There, the distinguished His Excellency Mr Ambassador Plenipotentiary and Extraordinary of the DRC in South Africa, found himself recharging his batteries diplomatically. If life is an eternal restart, better still an endless school, capacity building remains the prerogative of experienced professionals. Fidèle Mulaja could not rely on his vast political knowledge already acquired and politics only. The political and economic weight that South Africa represents for the DRC requires from the representative of the President of the Republic in Pretoria to possess an arsenal of knowledge in addition to his own achievements; and Mulaja Binene stepped out of his comfort zone to see his knowledge reinforced upwardly.

The Egmont site reveals that the Royal Institute is a Think Tank based in Brussels. Its interdisciplinary research is granted in the spirit of total academic freedom. Relying on the expertise of its own research officers, as well as that of external specialists, both Belgian and foreign, it offers analyzes and political options that are intended to be as operational as possible. For the government of the DRC, the choice of Egmont for the enhancement of diplomatic techniques is not an illusion. It is not driven by the spiral of lies like the unproven facts that others noisily propagate. Fortunately, the current regime has understood that it ought not to lend it certain truthful nobility.

During the training proceedings which took place from March 14 to 19, diplomatic participants enriched their knowledge thoroughly, as long as it is uncertain to gauge the many challenges presented by the current difficult times, it is better to stand steady ready for them. Such an upgrade of a Congolese diplomatic corps is extremely important in supporting the vision of the Head of State, His Excellency Felix Antoine Tshisekedi Tshilombo. As a Diplomatic Officer, an Ambassador remains the resident representative of a government in a foreign state or to an international organization. Knowing beforehand that the functions of an Ambassador include maintaining relations with the host State and promoting foreign policy strategies through international organizations, Fidèle Mulaja Binene, enamored with the desire to ensure the security of DRC citizens living in RSA, the host country, has deemed it appropriate to establish and maintain strong diplomatic and economic ties with RSA and administer all Embassy affairs therein, through actions and executing uncompromising deeds and initiatives; all in the harmonious use of a consistently concordant diplomatic language.

The Chief Executive of the Royal Egmont Institute, Mr Hugues Chanty, former head of the political section of the Belgian Embassy in Kinshasa, and former Belgian Ambassador to Côte d’Ivoire, Ghana, Liberia and Sierra Leone, believes firmly that the Egmont Institute, with its tradition of independent thinking, can make a valuable contribution to the foreign policy of countries like the DRC; he who was the Consul General of the Kingdom of Belgium in Bukavu, his vast curriculum crowned with the mastery of diplomatic notions and workings is part of the resources available to the Institute. It is clear that as a result of these new connections, Ambassador Fidèle Mulaja will build mutual understanding and support for Congolese politics by engaging directly with stakeholders in South Africa, through traditional media and social networks, by hosting events and by carrying out educational, cultural and sporting exchange programmes. Mister Binene does not forget that the main job of a diplomat like him is also to help and protect Congolese citizens. In case of loss of passport by a Congolese citizen and trouble with the law, Fidèle will be able to assist them as he has already begun to do.

Finally, the Congolese will have a dwelling provided by the republic, and towards which they will go in situation of hiccups. Unlike the outgoing ambassador who had favoured more the manhunt to quell any revolution against Kabila than the exercise of his prerogatives, in diabolical collaboration with the predecessor of Cyril Ramphosa, the then president of RSA. Mulaja strives to overturn the status quo and expand the DRC Embassy in South Africa with a new image. Soon the Congolese of South Africa will take part in the forum and monthly meetings hosted by the new Ambassador. These meetings will also allow the Congolese to exchange among themselves, with other local specialists and an informed public made up of representatives of the political, economic and academic spheres, the media and civil society.