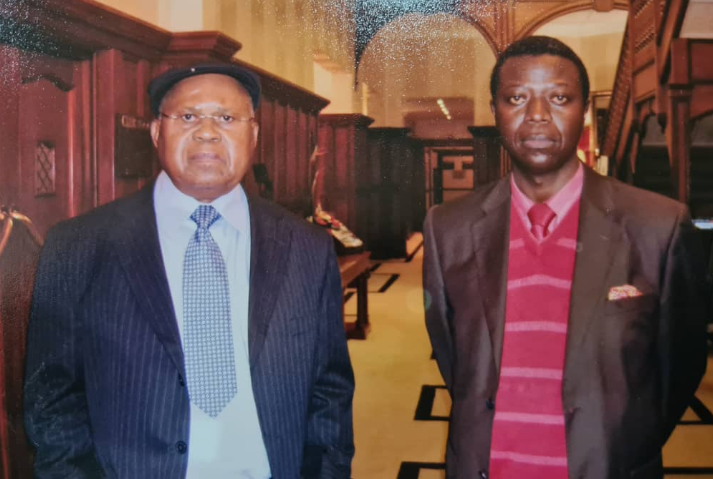 His name is Fidèle Mulaja Binene – and no one else! His Excellency the Ambassador of the DRC to South Africa, appointed in compliance with the Ordinance by the President of the Republic, His Excellency Félix Antoine Tshisekedi Tshilombo, on 15 February 2022. He embraced politics at the very young age within UDPS. The new DRC Ambassador in South Africa has never quit nor has he been lured by money offered by the previous regime under Kabila leadership to discredit the party. One step at the time, he progressed under the large wings of Dr Etienne Tshisekedi wa Mulumba. Fidele remained at his sides come hell or high waters until his last breath. Faithful in UDPS entrepreneurship, the new Ambassador fulfilled duties of the National Secretary in charge of Analysis of Political Angelism, and Deciphering within the UDPS.

It is not about dreaming, or even conjuring, or more or less procrastinating. The facts are stubborn, but it is the truthiness of a truthful truth that would suffer no contradiction. One of the DRC worthy sons, having lived in South Africa for many years, has been elevated to the pantheon of foreign national diplomacy. Fidèle Mulaja, a name to remember, is the new Ambassador of the DRC in South Africa. He replaced the irremovable Mpoko in this post, whose credentials were macabrely and heavily tarnished by self-enrichment and his loyalty to the Congolese gangrenous political ruling of yesteryear.  Graduated from the school under the mentorship by the Sphinx of Limite, Fidèle has fought all the battles that UDPS, his political, endured. He is the student par excellence of Dr Etienne Tshisekedi wa Mulumba. From a young age when he embraced politics, the new DRC Ambassador to South Africa, never imagined to leave him and look for pastures much greener elsewhere as many of his comrades before, during the struggle and afterwards. On the death of Dr Etienne Tshisekedi wa Mulumba, Fidèle Mulaja was National Secretary in charge of Decryption – Political Analysis of Events and Situations.  After his death, his son, the current President of the DRC, did not hide from the principles embedded in the experience of the UDPS, which instill the courage of not getting rid of the main and pivotal roots that planted the party. This is high caliber diplomacy! His Excellency the President of the Democratic Republic of the Congo, Félix Antoine Tshisekedi Tshilombo has a vision; that of equipping the country with forces and opportunities to allow its growth and emergence. For these purposes, he needs hard-working political fighters both internally and externally; and Fidèle Mulaja is far from being a hair in the soup.

Mulaja Binene has always been an early UDPS battalion fighter. He accompanied the Lider Maximo of happy memory, Dr Etienne Tshisekedi wa Mulumba, in every endeavour and undertaken trips. He played a significant role in various summits, conferences, workshops and seminars on behalf of the Union for Democracy and Social Progress. This is how his presence was noticeable in Sun City, Pretoria I and II, Lusaka. Since the 2006 elections failed to give any guarantees of transparency, the Lider Maximo voiced his concerns that were not dealt with. As a result UDPS boycotted votes casting, and they did not take part thereof. Five years later, Fidèle was with the Sphinx de Limete in all his travels to prepare the party’s participation in the 2011 elections with all their already suspected frauds and corruptions. Alongside the Sphinx, Fidèle Mulaja, was one of the party cornerstones. Whether it was for the rental of aircraft for the purpose of movements by the Congolese Udpsian political Moses, important events that change the life of a nation, Fidèle was dedicated to them all. His tireless political endeavours to raise the DRC to heights much higher are now being rewarded with this meritorious appointment.

In the face of a psychopathic, psychotic dimension and a narcissistic perversion of an entire people, few good men have distinguished themselves, and the case of His Excellency Mr Fidele Mulaja Binene is eloquently unique. His appointment is about rebuilding the Congolo-Congolese relations within the diaspora of his country in South Africa, whose gloom to the bone of well-being feelings had reached proportions to the brink of hatred.

From now on Fidèle will inculcate a mitochondrial dimension for an innovative political diplomacy.  South Africa plays a leading role in relations with the DRC. On the economic front, the unilateral volume of trade is flooding the Congolese market. The «made in South Africa» items are on display in food and super markets in the DRC. Noting by the regular frequency of South African airline, SAA flights, providing passenger and cargo connections, it bears testimony to the magnificence of South Africa’s place of choice in the Congolese experience. The effervescent mining sector in the DRC is enriched by the participation of South African capital. Their availability leads to the creation of jobs and the reduction of unemployment as well as the increase of the national tax returns. The Head of State has detected in Fidèle the rare bird to perfect these relations, and take into account the geopolitical equilibrium of different scales. His knowledge of national and international politics, his mastery of South African business and political circles and his personal relations with the leaders of the Republic of South Africa, speak volume.

Once Fidele takes office in the Rainbow Nation, it marks the beginning of a new diplomatic era between the RSA and the DRC. This is how his credentials do not suffer from any hiccups, nor contain deceiving information and reluctance with DIRCO (Department of International Relations and Cooperation)

A jewel of diplomatic normalization is established in terms of transparency without hesitation and suspicions in the relations between these two countries. It is Fidèle’s genius capacities in the Mandela Nation that will facilitate this flow of trust between the two Presidents. Having been among the first to recognize the victory of the President of the Republic, His Excellency Félix Antoine Tshisekedi, the South African President, Cyril Ramaphosa, in the last elections held in the DRC, deserved an Ambassador- Interlocutor to skillfully meet his expectations; it goes mutatis mutandis the DRC Head of State. Fidèle Mulaja masters the command of English and French to be the perfect link between the Democratic Republic of Congo and South Africa. The political stability of the DRC is one of the first concerns by both Presidents. His Excellencies Félix Antoine Tshisekedi Tshilombo and Cyril Ramaphosa have worked and continue to work for the sustainability of peace and security in the Great Lakes region. The siege recently implemented, was met with much emotion in view of the deterioration of social peace in this part of the country. RSA’s political intelligentsia contributed to the establishment of a rapid intervention force alongside MONUSCO.

As President of the DRC, His Excellency Félix Antoine Tshisekedi Tshilombo set the bar very high. He works to bring the DRC to life in a place enlightened by the rays of justice, prosperity, compassion and all the good things that good governance brings. If necessary, the DRC will continue to be chained in darkness and governed as if a heavy veil had fallen on it.

It is with a standing ovation that the unwavering attachment by the new DRC Ambassador to RSA, Fidèle Mulaja, to UDPS party ideals, is rightly rewarded. His legendary loyalty to the party in which he had acquired political maturity weighed heavily in order for the Congolese to cast votes for free and transparent elections. Sun City and Pretoria still ring in the head of the nation as a rhapsody of dawn that will have known the horizons of glory at dusk. Today, the commandments of truth and justice are deployed in unison to mark the advent of the great Congolese destiny, which the President asks all Congolese to associate with a common goal that will enable them to overcome poverty, the injustice and despair that have settled for too long, as bottlenecks, preventing fulfillment….. and Fidèle Mulaja Binene is one of the architects who will have shaped the new political policy in the new in the DRC. Thank you His Excellency, from the DRC all eyes are on you, especially the DR Congo diaspora in South Africa!